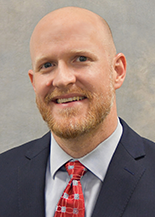 In September 2018, John E. Tyler was named director of housing initiatives and innovation at the SC State Housing Finance & Development Authority (SC Housing), where he provides leadership and oversight for communications, research, and policy. In this role, Tyler works with SC Housing staff and the State’s lawmakers alike to bring data-informed housing policy to South Carolina.

Prior to his joining SC Housing, Tyler served as an attorney at Sweeny, Wingate & Barrow, P.A. He served as a litigation attorney for nine years focusing heavily on the construction industry, the financial industry, the insurance industry, professional liability, and healthcare. Earlier in his career, he worked in the South Carolina Senate for Senator Warren Giese and for multiple political advocacy groups.

A life-long native of Columbia, he is married to the former Christine Zaepfel of Chapin, SC. John and Christine have four children—yes, they have their hands full! John enjoys spending time with his family, the great outdoors, playing guitar and leading music at his church, smoking BBQ on the weekends, and anything sports or music-related.